Dice Arisugawa, a.k.a. Dead or Alive, is a gambler and the third member of Fling Posse.

A gambler so addicted to the game he’ll lay not only whatever cash he can get his hands on, but even his life, down on the table for the right bet.

There’s nothing he despises more than the phrase, “the straight and narrow”, and he’s only survived as long as he has thanks to the extraordinarily good luck he was born with. He makes all of his decisions with the dice he carries around.

As often as he finds himself flat broke, he’s quick to latch onto anyone who will feed him.

Dice has blue hair in a half mullet over his right shoulder and purple eyes. He wears a hair accessory on the left side with 12 gold beads, endings in a die with a tassel. He also has noticeably sharp canines.

Dice wears a black long sleeved shirt, white ripped pants and black loafers. He has a black double belt set and a green parka coat with black fur and the Fling Posse gold star on the back. He also carries around a black boombox.

Dice's Hypnosis Mic is a ribbon microphone with a gold accent around in the shape of a dollar sign. Dice’s speaker takes the form of a slot machine with multiple floating parts: three large 7s, dice and coins. The top has "Fling Posse" written on it. 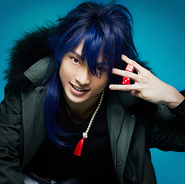