He’s a pessimist and thinks about everything in a negative light, so friends are not exactly something he has in spades. In fact, Hifumi Izanami is his only friend, and they’ve been close ever since elementary school.

Despite the number of awful situations he’s found himself in because of Hifumi, he’s still glad to have him around.

Doppo has messy red hair that has teal undersides and blue eyes.

Doppo’s Hypnosis Mic is a flip phone. Doppo’s speakers take the form of a turntable in a briefcase and multiple monitors with pills and papers flying about. 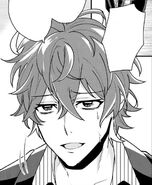 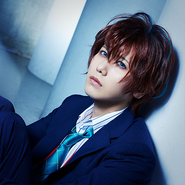