Gentaro Yumeno, a.k.a. Phantom, is a novel author and also the second member of Fling Posse.

A writer who dresses like an intellectual from a bygone era. He enjoys making up stories about the lives of the strangers he passes on the street.

He is an extremely persuasive liar and often times those lies would go unnoticed were it not for his habit of teasing the gullible by telling them, “That was just a lie”.

Gentaro is seen as having ‘outdated fashion’. He wears a white kosode and black undershirt, and grey hakama with a black obi and yellow cord. Over this he wears a black cape with a patterned purple underside, fastened with the Fling Posse gold star pin and chain. He wears black lace-up boots.

Gentaro’s Hypnosis Mic looks like a candlestick telephone. His speakers take the form of red pedestal lanterns with omikuji flying around.

He has a calm and patient personality. However, he also has a mysterious personality. As he often tell some lies in case to joke but sometimes his lies are used to cover something he hides about. He has deep feelings for his good friend, Dice Arisugawa. He often shows his sincere feelings through his lyric writing.

*It should be important to point out that there is a translation of an interview with Gentaro’s va. In it, they asked why he talks the way he does to which he answers: “During conversations, Gentaro sometimes plays other characters. In order to do that, he changes his tone of voice. By using this character changing skill, maybe you can hear him change his voice as he tells stories.” The lack of pronouns used could simply be that of his personality to make up stories and lie. (https://eng-hypnosismic.tumblr.com/post/176844101501/tl-interview-w-saito-souma-the-lying-phantom | source) 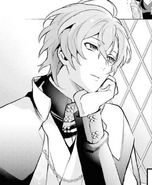 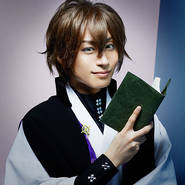