Hifumi Izanami, a.k.a. GIGOLO, is a host and the second member of Matenrō.

A host who works at the "Fragrance" host club in Shinjuku, Hifumi radiates confidence and charisma at first sight. However, despite the impression that his gregarious nature and carefree tone gives off, Hifumi is in actuality completely terrified of women. He became a host in attempts to conquer his fear, and after much toil, he learned to transform himself into a womanizer once he dons his suit.

Hifumi is extremely dexterous and has a wide range of hobbies ranging from the indoor to the outdoor.

He and Doppo have known each other since they were in elementary school, and he frequently mends Doppo’s torn suits for him. The two share an apartment.

Hifumi wears a black shirt, grey waistcoat, black pants, and brown shoes. His grey suit jacket aids with his fear of women. He wears many accessories: a silver belt, multiple belt chains (one with a normal chain, and another with Matenrō’s crosses), a yellow rose in his suit jacket breast pocket, two necklaces (one with a Matenro cross and one with a red pendant), and rings on his right index and left index, pinky and thumb fingers.

Hifumi’s Hypnosis Mic has a diamond and gold body with “GIGOLO” written on it, and the windscreen looks like a disco ball. Hifumi’s speaker takes the form of gold roses with speakers inside and a disco ball. 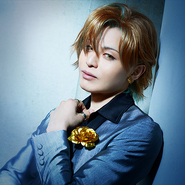