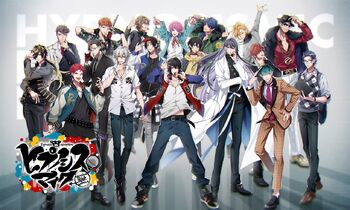 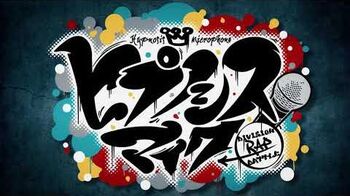 Hypnosis Mic -Division Rap Battle- (ヒプノシスマイク-Division Rap Battle-) is a Japanese multimedia project, based off rap and hip-hop, created by King Records under their EVIL LINE RECORDS label. The characters were designed by Idea Factory under their Otomate label, with Yuichiro Momose as the main scenario writer. The project had started on September 2, 2017.

The franchise has grown to include manga adaptations, live stage production, a mobile game, and an upcoming anime adaptation.

The history of H was eradicated by an armed military force in a war. The conflict was replaced, not by the military forces, but by a special device mesmerizing the psyches of the people. Its name is Hypnosis Microphone.

The lyrics channeled through this microphone affects people's sympathetic and parasympathetic nervous system​s, making it possible to alter a person's state of mind.

Outside of the Chuohku District, men live in the Shinjuku, Shibuya, Ikebukuro, Yokohama, Osaka, and Nagoya Divisions.

As each division's representative MC group fought, the districts who won were allowed to acquire certain parts of other territories.

In this world, where words, not weapons, became tools of power, the battles for territories holding men's pride and prestige begins.

In the wake of the Third World War that eradicated the fifth of humanity, the government of Japan was overthrown and replaced by the Party of Words, using Hypnosis Mics. The Party of Words had split the country into so-called "Divisions", the only parts of the country where men were allowed to live, with the Chuohku District as the center. That's how the H Era began.

They handed out the mics to the men, allowing them to participate in the rap battles for the territory, which had almost started a turf war to rule the country. Around that time, the legendary rap group, The Dirty Dawg, consisting of Ichiro Yamada, Samatoki Aohitsugi, Ramuda Amemura and Jakurai Jinguji rised. They took over the entire country, being right after the Party of Words, however, one day, the group disbanded and former friends turned into enemies.

Years later, the Party of Words organized the Division Rap Battle, the grand championship between Divisions' representatives where they can't fight each other for money, territory, and prestige. The former members of The Dirty Dawg had formed their own teams to represent their home Division:

Eventually, they were joined by the two new teams:

For all actors, track makers and staff members, working on the Hypnosis Mic, see here.

The story of Hypnosis Mic is mainly told through the audio drama tracks included with each CD release (except MAD TRIGGER CREW VS Matenrō) beginning with the current divisions getting together and continuing the plot from there.

There are four different series of manga adaptations of Hypnosis Mic. All of their scenarios are written by Yuichiro Momose. Some limited editions of manga also include exclusive duet songs and drama tracks.

Battle Season is a project requiring user participation to vote for teams that battle it out on their respective albums. Those that buy the first press edition of the CDs or purchase select official merch are eligible to vote via the website using a code that comes with the merch.

Retrieved from "https://hypnosis-mic.fandom.com/wiki/Hypnosis_Mic_-Division_Rap_Battle-?oldid=18767"
Community content is available under CC-BY-SA unless otherwise noted.