Ichijiku Kadenokoji is the Deputy Prime Minister of Japan, the Director General of the Administrative Inspectorate Bureau of the Metropolitan Police Department, and a second member of Party of Words.

The second person in the Party of Words hierarchy. The woman in charge of all political measures of the Party.

She deeply respects the leader of the Party, Otome Tohoten and owes her a debt of gratitude. She despises men from the bottom of her heart and believes that the world would be better without them. Even though she’s very strict with herself and others, she has a soft spot for Nemu Aohitsugi.

Ichijiku has curled light red hair that is tied with a black bow and an undercut, blue eyes, she wears pink eyeshadow with dark red lipstick and she has the Party of Words symbol tattooed on her left breast.

Ichijiku wears a blue coat with a black corset, white shirt and black stockings. She wears a Party of Words jacket over her shoulders and black high-heeled boots. She carries a cane with a diamond headpiece.

Ichijiku is ruthless and unforgivable woman who never tolerates any insubordination, even from the fellow Party members. Ichijiku hates men from the bottom of her heart, firmly believing that the world would become a better place without them. Despite her ruthlessness, Ichijiku is quite close with Nemu, being concerned of her well being.

The songs featuring Ichijiku are: 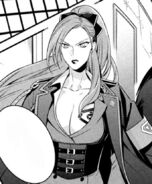