Hypnosis Mic Wiki
Register
Don't have an account?
Sign In
Advertisement
in: Buster Bros!!!, Characters, The Dirty Dawg,
and 2 more

Ichiro Yamada, a.k.a. MC.B.B, is the manager of Odd-Jobs Yamada, former member of Naughty Busters, Mad Comic Dialogue and The Dirty Dawg and the current leader of Buster Bros!!!.

He is a former member of The Dirty Dawg, the oldest son of the Yamada family, and proprietor of Odd Jobs Yamada. He used to be such an infamous delinquent that it was said that there wasn’t a single person in Ikebukuro who didn’t know his name.

He’s a very compassionate person with a deep-seated sense of justice who can’t bring himself to ignore people in need. Everyone admires him for how well he looks after his little brothers. As a hardcore nerd, his hobbies include watching anime and keeping up with all the latest light novels.

He and Samatoki Aohitsugi, leader of the Yokohama Division, hate each other’s guts.

Ichiro has chin length black hair and selectional heterochromia; his left eye is red, whilst his right eye is green. He has a mole under his left eye. He has black lobe piercings.

Ichiro wears a white hoodie with two zippers, and a red-and-blue varsity jacket, printed with “BB”, “01”, and his quote: “You’ll never find a rainbow if you’re looking down”. He also wears blue jeans, and black sneakers with “Buster Bros” labelled on both soles. He wears rings on his right middle finger, and left middle and thumb finger. He also wears a red badge labeled “B” and red headphones.

During the TDD era, Ichiro had shorter hair, and wore a black t-shirt, red hoodie, and short-sleeved jacket with a red band around his right arm. He also wore black baggy pants with a braided red cord and red-and-black shoes.

Ichiro’s Hypnosis Mic is a standard red-colored microphone with rings decorated by “BB”. His speakers are a DJ turntable, a set of standard speakers, microphones and laptop, labeled with various graffiti and the Buster Bros!!! logo. 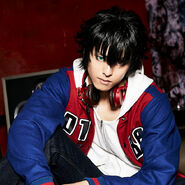 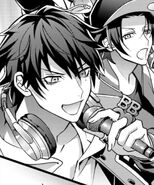