Jakurai Jinguji, a.k.a. ill-DOC, is a doctor, former member of Kujaku Posse and The Dirty Dawg and the current leader of Matenrō.

He is a genius doctor, once under contract to eliminate terrorists, he became a doctor to atone for his sinful way of life. Though he often goes to areas of conflict around the world, he is currently practicing at the Shinjuku Central Hospital.

His drinking habits are terrible, and once he drinks, he goes on a rampage with an Edo dialect.

He has a cat and dog relationship with Ramuda, leader of the Shibuya Division.

A former member of The Dirty Dawg and genius doctor. His tall and lanky frame is wrapped in an aura of mystery. He can use his unique flow to rejuvenate people.

Jakurai has a fondness for strange characters, and while even Ramuda Amemura of the Shibuya Division had piqued his interest, they are currently at odds with each other.

He enjoys meditating and fishing and has invited Hifumi Izanami along on fishing trips.

Jakurai has very long, grey-purple hair with a lavender underside, blue eyes and he is the tallest character in the series.

Jakurai wears a black turtleneck with a silver cross pattern and 3/4 sleeves, dark blue pants and black shoes. He is often seen wearing white lab coat with a blue lining.

During the TDD era, Jakurai had his hair tied back. He wore a grey military uniform with black boots, white gloves and a white lab coat. He is seen with a brown satchel for medical equipment.

Jakurai’s Hypnosis Mic takes the form of a ribbon mic with wings and a stand. It is decorated with a snake and an IV drip. It bears resemblance to the rod of Asclepius. Jakurai’s speaker takes the form of a stylised cross with multiple smaller round speakers, similar in shape to Ramuda’s speakers. 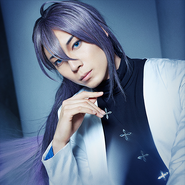