Jiro Yamada, a.k.a. MC.M.B, is a high school student, a part-timer at the Odd-Jobs Yamada and the second member of Buster Bros!!!.

Second son of the Yamada household and Buster Bros!!!. A strong fighter. He idolizes Ichiro Yamada, who is beloved by everyone. He grew up watching his big brother's back, and thus became a delinquent like him.

Just like Ichiro, he hates bullies. Due to his big brother's influence, he is well-versed in anime and light novels.

Anyone who makes fun of his big brother will be crushed out (or will be devoured) and he always fights with Saburo Yamada.

Jiro has a neck-length black hair with curtain bangs and selectional heterochromia; his left eye is green, whilst his right eye is yellow. He has a mole under his left eye, and under the left side of his mouth.

Jiro wears a black t-shirt with two zippers and a blue-and-white bomber jacket with ‘Buster Bros’ labels on the chest. He also wears ripped grey jeans and black sneakers with blue accents. He wears rings on his right index and ring fingers on both hands and on his left thumb. He also wears a red badge labeled “B” and a smaller blue badge labeled “M” on a blue-and-white plaid shirt tied around his waist, and a red-and-black snapback hat.

Jiro’s Hypnosis Mic is a standard blue-colored microphone with rings decorated by “MB”. His speakers take the form of a rock ensemble with flying V guitars, amplifiers, and cymbals with the Buster Bros!!! logo on a kick drum. 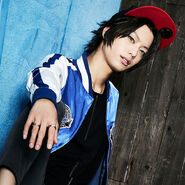 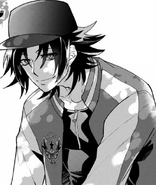 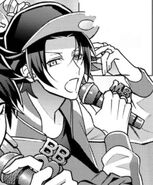