Jyushi Aimono, a.k.a. 14th Moon, is a Visual kei musician and the second member of Bad Ass Temple.

He is a vocalist in ArgoξOrchestra, Visual kei band. A narcissist crybaby. He doesn't have many friends, but he cherishes his stuffed plushie pig named "Amanda" who is 8 years old. When he meets someone for the first time or is nervous, his personality changes and he talks in a pompous and exaggerated tone. When he was a student, he was harshly bullied. At the time, Hitoya Amaguni advocated for him and has since earned Jyushi's respect.

Jyushi has black hair with yellow highlights in a Visual kei mullet, his fringe covering his right eye. His eyes are blue with long lashes, and he has shorter eyebrows. He has multiple piercings: multiple lobe piercings on both ears, a conch on the right and lightning bolt dangle earrings.

Jyushi wears a black shirt, black pants and maroon combat boots. He wears a grey-and-black military style jacket with gold accents and a chain choker necklace. He has multiple rings on his right pinky and index and left index and thumb fingers.

Jyushi’s Hypnosis Mic looks like a crushed black-and-red umbrella with a gothic pig, resembling Amanda, with its behind as the windscreen. His speaker takes the form of two tombstones, one reading "REST IN PEACE". 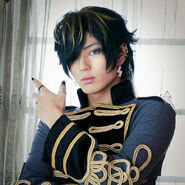