Jyuto Iruma, a.k.a. 45 Rabbit, is a corrupt police officer and the second member of MAD TRIGGER CREW.

An active-duty police sergeant in the Organized Crime Unit of the Yokohama Police Department.

A vicious police officer familiar with the world of the yakuza, willing to investigate through illegal measures, though he hates the illegal drugs that led to the death of his parents and colleague.

He will use any means to achieve his goals. He holds a mutually beneficial relationship with Samatoki Aohitsugi of the Katen yakuza clan.

An active-duty police sergeant in the Organized Crime Unit of the Yokohama Police Department. He joined the force to stomp out drug trade, but he’s in deep with the yakuza and gets his hands dirty with a wide variety of criminal activities including assault, bribes, embezzlement, extortion, and blackmail, just to name a few. He’s developed a mutually beneficial relationship with Samatoki Aohitsugi through his beat.

As the resident problem-solver, he’s often tasked with putting out fires within the Yokohama Division.

His catchphrase is, "I’m throwing you in the slammer!"

Jyuto wears a black suit, a grey shirt with triangle-shaped collar pins and a chain, and a black tie with a golden tie clip. He also wears maroon shoes, red gloves and a watch on his right hand.

Jyuto's Hypnosis Mic is a black police radio and red harness. His speakers take the form of black-and-red siren speakers and a red police siren on top. 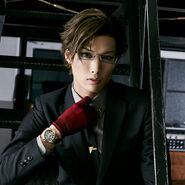