Kuko Harai, a.k.a. Evil Monk, is a heir of the Buddhist temple, former member of Naughty Busters and Mad Comic Dialogue, and the current leader of Bad Ass Temple.

He is the heir of the Kugen temple, a renowned Buddhist temple. At 14, he mastered an ascetic life his father, Shakku Harai, was unable to. He's badmouthed and his behavior is inappropriate for a monk yet, his faith is deep and he treasures his friends. He often makes up moralising-like remarks. He hates crowds and often acts alone.

In the past, he was a part of Naughty Busters with Ichiro Yamada in Ikebukuro.

Kuko has short, spiky hair and gold eyes with catlike pupils. He also has noticeably sharp canines. He has multiple piercing on both ears: lobe gauges, two lower helix, a snug, a rook, and an upper helix.

Kuko wears black monk-style clothing with a white undergarment. He wears a blue and white bomber jacket with gold shachihoko and lightning bolts on the chest, with black details. He also has black kicker boots, a black studded belt with prayer beads attached and a chain necklace. He has multiple rings on his right index, ring and thumb and his left index, ring and pinky fingers.

Kuko’s Hypnosis Mic looks like a silver khakkhara/shakugo with gold accents and rings. Kuko’s speaker takes the form of a corroded bronze bell/bonshō, tsurigane, etc., with a dragon wrapped around it and speakers in its mouth. 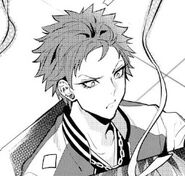 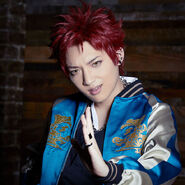