Nemu Aohitsugi is the Vice Chief of the Administrative Inspection Bureau and a current member of Party of Words.

The rising talent of the Party of Words and the younger sister of Samatoki Aohitsugi from the Yokohama Division.

She has a strong spirit and impressive rap skills, which are said to be comparable to Samatoki's. She was brainwashed into joining the Party by one of Ramuda Amemura's clones, using the true Hypnosis Mic.

During the TDD era, Nemu wore a black striped blouse, long olive overall skirt, black tights and Mary Jane heels. She also wore a bracelet on her right hand that she made from her mother’s protective charm for her and Samatoki.

Nemu can be described as kind and friendly young woman with a positive outlook on the world, believing that even at darkest times, things will always turn better. She cherishes her older brother Samatoki a lot, as he's the only family she has but can't help but be concerned about his violent nature, although she knows that he's doing everything for her sake. Despite her fragile appearance, Nemu has a strong spirit and is ready to face any danger to do what is right, even if the odds are not in her favor.

After joining the Party of Words, Nemu changed quite a lot, becoming much more cold and calculating, not letting anything get in the way to her goals. She sincerly believes that the Party can create a better world without violence and she's willing to follow Otome and Ichijiku. Her mindset, as well as her relationships with Samatoki became much more complicated, however, her old self is still present. 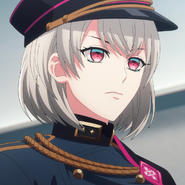