Once Upon a Time in Shibuya

Once Upon a Time in Shibuya is a duet song, performed by Gentaro Yumeno and Dice Arisugawa. The song was released on April 25th, 2020 as a bonus for the limited edition version of the third volume of Hypnosis Mic -Division Rap Battle- side F.P & M manga. 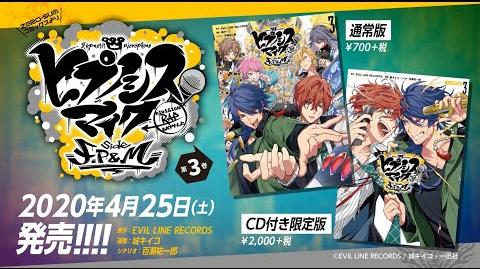 ---(Gentaro Yumeno)---
Once upon a time, there were two friends in Shibuya
This is the tale of Dice and Gentaro
That night in Shibuya, the local people gathered
for a festival being held.

---(Dice Arisugawa)---
Welcome, welcome. Once another welcome
Come look at these strange things
It's free to just come have a look. Hey, patron over there,
Your passing by must surely be a joke. It's enough to make me laugh
Here you can find my wares from the West,
like this rare deck of cards, have a look.
Their usual price is 1000yen. But today's been great.
They're half off, 500 yen! You must be thinking, 'that's a great price' huh?

---(Gentaro Yumeno)---
Half price? How generous a deal you make.
No matter how you look at it, these cards are worth buying
Poker or Blackjack, Oicho-kabu or Baccarat
If they can be played, then this is a treasure
That's why this encounter is one in a thousand.
The scenery fades in my delight.
As I've spotted the thing I've searched for
Stuck right there, is a price tag of 100 yen

---(Gentaro Yumeno)---
Ahahaha. That was but a lie. It's identical to the one sold at the 100-yen
store saw it down there. I was just leading you on

YO! Gentaro! Let's try our hands at that game

---(Dice Arisugawa)---
Yo! Just like that! I like how you're up for
anything You're gonna show me what you're made of, right?

---(Dice Arisugawa)---
You're doing this on purpose, huh!? Fishing yo-yo, yo!
You've got one of these, so until the paper breaks,
the one who's caught the most'll be the winner. Nice and simple, huh?
The loser'll have to do one thing the winner says! Deal?

---(Gentaro Yumeno)---
Yo yo it's about to get dark soon
We can call it a draw, how does that sound?

---(Dice Arisugawa)---
Can't be helped then. Next time, let's bet on the shooting stall instead!
Oh, they have goldfish scooping too!

---(Gentaro Yumeno)---
As the festival draws to its close, why do I feel somewhat lonely?
Should the outcome be the same if we were to take it from the beginning?
If I were to meet you in a dream, would my feelings be unresolved still?

---(Dice Arisugawa)---
What ya talking about? This another lie? Gentaro,
Was there something strange in the ramune you drank earlier?

---(Dice Arisugawa)---
Oh so it's true!
The cherry blossoms are great because they scatter, you know?
In gambling, you can win or lose - aren't both fun?
So if this festival lasted forever,
we couldn't really call it a festival, huh?

---(Gentaro Yumeno)---
Thank you. Dice. Those words are priceless to me.
They've struck me in the heart.
Only this time, will the borders between the truth and lie blur