Otome Tohoten is the Prime Minister of Japan and a current leader of Party of Words.

The leader of the Party of Words. She took control over the government by coup d’etat using Hypnosis Mic in the first year of the H Age. She created and ratified the H law, abolished the military and built the women-centered society. In the third age of H, organized a Division Rap Battle in which men compete against each other with their Hypnosis Mics for the territory.

She wears a black-and-pink capelet Party of Words uniform with two medals, a blue skirt, and black kitten heels.

The songs featuring Otome are: 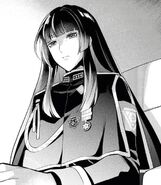 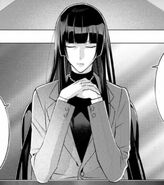