Ramuda Amemura, a.k.a. easy R, is a fashion designer, former member of Kujaku Posse and The Dirty Dawg, and the current leader of Fling Posse.

He is the producer of the fashion brand 'Empty Candy'.

He looks as young as a primary school student, but is quick witted and calculating, though he often makes absent-minded remarks with a frequent lack of tact in his words. He's very popular with women due to his cuteness. He is connected to Chuohku and holds a great secret that can't be told to anyone.

A peculiar figure. He has a cat and dog relationship with Jakurai, leader of the Shinjuku Division.

He is a former member of The Dirty Dawg and fashion designer. He may look childish on the outside, but he’s sharp as a tack on the inside and knows exactly what people think of him.

Despite his forwardness and frequent lack of tact in his choice of words, people love him for his natural gift of cuteness. Even with his obscene popularity, he doesn’t play favorites. He’ll give you a piece of candy if you ruffle his hair.

He has a cat and dog relationship with Jakurai, leader of Shinjuku Division.

Ramuda has pink-purple pink-ombre hair with light pink highlights and blue/pink eyes. He is the shortest character in the main cast. He also has lighter eyelashes than anyone else is the cast, grey rather than black.

Ramuda wears a white dress shirt and red ribbon tie with a silver Fling Posse star medal. He wears a long blue hoodie, black leather pants and black-and-red boots. He also wears a black-and-pink belt set with a heart buckle on the end. All his clothing is oversized, like much of Shibuya fashion.

During the TDD era, he wore a white sweater with a design of black sleeve accents, two lollipops crossed out with red graffiti, a light green “Λ (lambda)”, and his quote, “the optimist sees the donut, the pessimist sees the hole”. He also wore white pants, a black belt and black-and-green trainers with red laces. He wore a black baseball cap with rings and red and green arrows, and a black choker.

Ramuda’s Hypnosis Mic looks like a child’s toy microphone with pink, yellow and a blue bow. His speakers take the form of multiple spherical speakers wrapped in candy wrappers.

On the exterior, Ramuda gives an impression of a very cheerful, flashy and quite childish person who seeks fun in any given situation. He enjoys clinging to people and playing around with them. Talking with him can be difficult due to his forwardness and frequent lack of tact in his choice of words. He can also be quite mischievous. Due to his appearance and general appeal, he is quite popular with women (he tends to call them "onee-san's").

However, Ramuda can switch to his true, darker nature, which is signified by him lowering his voice (and also switching his pronouns from "boku" to more masculine "ore"). Behind his childish exterior, Ramuda is cynical and calculative. He usually drops his facade in serious situations, when people are trying to pry into his past or angering him in one way or another. Despite that, Ramuda can't help but be passionate when it comes to his friends, although he's not supposed to feel anything towards them to begin with.

The songs featuring Ramuda are: 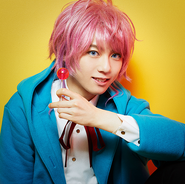 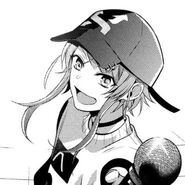