Rei Amayado, a.k.a. MC MasterMind, is a conman, the creator of Hypnosis Mics, father of the Yamada Brothers and the third member of Dotsuitare Hompo.

A self-proclaimed conman. He is the person responsible for developing Hypnosis Microphone and bringing it to Chuohku. Formerly affiliated with the military technical development department. Involved with Chuohku and other divisions, while operating behind the scenes, although this speculation is engulfed in mystery.

As charming as he is, he'll stop at nothing to carry out his plans. Although he always keeps an arrogant-like behavior and does not show his real intentions, at the same time, he is a man of his word with a strong sense of duty.

Father of the three Yamada brothers.

Rei has wavy black hair and selectional heterochromia; his left eye is green, whilst his right eye is grey, which is usually hidden behind his sunglasses. He has a beard and a scar on his right eye.

Rei’s Hypnosis Mic is a gold-and-black piezoelectric microphone that looks like a sceptre. It is decorated with gold laurel accents and red details. His speakers take the form of a Japanese folding screen with a phoenix design.

Arrogant and pompous on the first glance, Rei uses his charm and other methods to manipulate people and get what he wants from them. Although he might be seen as a person who never takes anything seriously, Rei can easily change his attitude and become very serious, but it's hard to tell what he actually thinks about. Despite his twisted nature, Rei is a man of his word and has a strong sense of duty, however, he always keeps his real intentions in secret.

The songs featuring Rei are: 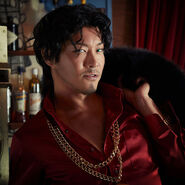