Rio Mason Busujima, a.k.a. Crazy M, is the former Navy soldier and the third member of MAD TRIGGER CREW.

A former Sergeant First Class of the Naval Forces and the member of the Special Extermination Operations Unit. Half-American on his father's side, and half-Japanese on his mother's. He speaks and behaves as if he were still a soldier. During his time as a naval officer, he respected rank above anything else. For example, if a superior told him that white was black, then white was black. In dire circumstances, he shows no mercy to his enemies.

That being said, he's calmer in peacetime and likes to help people. His hobby is cooking food that serves a practical purpose. His skills are those of a professional, but for some reason, Samatoki and Jyuto fear him.

Rio has short orange hair with an undercut, and blue eyes. Rio has a stud helix piercing on his right ear.

Rio wears a grey camouflage military uniform with triangular studs on breast pockets, black fingerless gloves and black boots with red shoelaces. He also wears a military dog tag and a red bandana around his right leg. He also usually carries a hunting rifle behind his back.

Rio’s Hypnosis Mic is a dark-green military walkie-talkie with a red ribbon around its antenna. His speakers are missile-launching cannons with four barrels and red ribbons around it.

Rio fits the image of the perfect soldier: loyal, determined, always ready to follow the orders of his commander. Thus, more than anything, Rio values loyalty, determination and dignity in people.

In the peacetime, Rio is quite calm, but also a bit stiff and thick-headed, and seems to be not used to civilian life, as he keeps behaving like a soldier and prefers to live survival lifestyle in the woods. Rio is shown to be kind and selfless, being always ready to treat anyone to his cooking and even lending Dice a large sum of money, without being concerned of him paying back. Rio has a deep respect for food and cooking, a value he learned from his commander.

As a soldier, he's completely merciless to his enemies and never goes easy on them, as to do so would be disrespect. In return, Rio refuses to be pitied by his opponents, always telling them to go at him with all they've got. 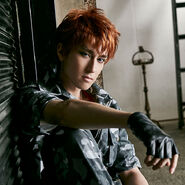 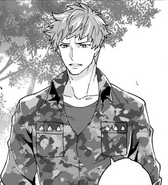 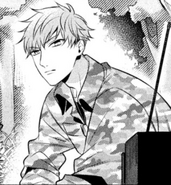