A math teacher at the Osaka's Gyoshin Private High School. As a teacher, he's beloved by his students.

He used to be in a comedy duo with Sasara Nurude. known as "Dotsuitare Hompo", but because of a traumatic event, to this day, he developed a crippling stage fright and became unable to speak well in front of large crowds. Normally, he speaks standard Japanese, but in front of his friends and Sasara, or at times when he is really angry, he lets his guard down and speaks in Kansai dialect.

Rosho has slicked back purple hair and red eyes. He wears round glasses on a glasses chain.

Rosho’s Hypnosis Mic is a wireless headset and earpiece. His speakers take the form of a classroom blackboard with a clock. The writings on a blackboard are the Own Stage lyrics and the clock reads 10:31. 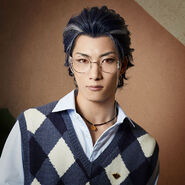