Saburo Yamada, a.k.a. MC.L.B, is a middle school student, a part-timer at Odd-Jobs Yamada and the third member of Buster Bros!!!.

Third son of the Yamada household and the youngest in Buster Bros!!!. A genius-type who can do just about anything. Unlike his brothers, not a delinquent.

Respects and looks up to Ichiro. Thought about becoming a delinquent at first, but after Jiro became the one to follow in Ichiro's footsteps, he decided against it.

Generally has good behavior, but will ridicule someone the moment he thinks they are beneath him. His hobbies are board games and card games.

Because of his twisted personality, he doesn't have many friends. Wants someone he can always be together with.

Saburo has chin length black hair and selectional heterochromia; his left eye is blue, whilst his right eye is green. He has two moles under his left eye, and under the left side of his mouth.

Saburo’s Hypnosis Mic is a standard yellow-colored microphone with rings decorated by “LB”. His speakers take the form of a gold pipe organ with Buster Bros!!! logo on the pipes. 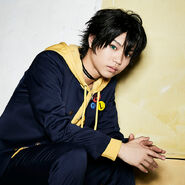 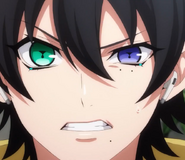