Samatoki Aohitsugi, a.k.a. Mr.Hc (or Mr. Hardcore) is a yakuza, the current leader of MAD TRIGGER CREW, and a former member of Mad Comic Dialogue and The Dirty Dawg.

A former member of The Dirty Dawg and the second-in-command (wakagashira) of the Katen Family, yakuza clan based in Yokohama.

He has a perpetual frown on his face and is quick to start a fight if something displeases him, but he would never raise a hand against a woman. He even became a yakuza for his beloved little sister, Nemu Aohitsugi. He treasures the good luck charm she made for him.

He and Ichiro Yamada from Ikebukuro Division hate each other’s guts.

Samatoki has chin length white hair and red eyes with long lashes. He also has multiple piercings: black huggie earrings on both lobes, a black stud on his right upper lobe, a black industrial on his right and two helixes on his left.

Samatoki wears a white shirt with signature skull prints on the chest, dark blue pants and black boots. He also has a triangle-shaped necklace, and the black-and-white bracelet on his right was handmade by Nemu from their mother’s protective charm.

During the TDD era, Samatoki had his hair slicked back. He wore a white t-shirt, dark-grey ripped jeans and white boots. His leather jacket had his quote “life is not fair” with three stars below it written on the back. He also wore a dagger-shaped pendant, lapel pins (a star, and the other a skull in a horse shoe), and Nemu’s bracelet.

Samatoki’s Hypnosis Mic is a silver skull-shaped microphone and stand. Samatoki’s speakers take the form of a blue-lit skeleton emerging from a giant coffin.

Given to his position in the yakuza, Samatoki is an aggressive and intimidating man who can be easily provoked for a fight. When he isn't angry, he is more laid-back and gets along with people pretty well, as long as they don't piss him off. Despite his rather cynical and ruthless mindset, family and team bonds are very important to Samatoki, as he acts as a loyal leader to Jyuto and Rio and cherishes his younger sister a lot. Although he utterly despises the Party of Words and is determined to bring them down, he swore to never raise a hand on a woman. 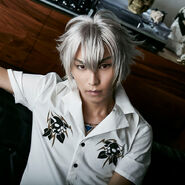