Sasara Nurude, a.k.a. Tragic Comedy, is a manzai comedian, former member of Mad Comic Dialogue and the leader of Dotsuitare Hompo.

A stand up comedian. Though on stage he's a genius at making people laugh, in private, for some reason he repeats tacky gags. He and Rosho were in a manzai duo together as Dotsuitare Hompo, but they disbanded and he now works as a solo artist. The name Dotsuitare Hompo was later inherited to become their new team name.

A long time ago, he teamed up with Yokohama Division's Samatoki as Mad Comic Dialogue.

He is a stand-up comedian. There's nothing he loves more than making people laugh. Curiously, while he's a silver-tongued comedic genius on stage, his friends are more accustomed to hearing strings of awful puns.

He used to be part of Mad Comic Dialogue with Samatoki back in Ikebukuro.

Sasara has ombre-green hair. His eyes are bright gold, although they are usually closed, which is known in Japanese media as “fox eyes” (“kitsune no me”). He has a tragus piercing on both ears.

Sasara wears an orange-and-brown houndstooth patterned suit with a white shirt, pink tie and black shoes. He wears a fan shaped lapel pin. He’s also usually seen with a fan which is a common attribute for Japanese manzai comedy. (The fan is also known as a harisen).

Sasara’s Hypnosis Mic is a gold-colored ribbon microphone with a fan decoration on a stand. His speakers take the form of a maneki-neko (lucky cat) and koban coins - the middle coin reads "rhyme".

He is typically happy, calm, and usually cracking awful puns, he also has a bad habit of making jokes despite the predicament he's in. He doesn’t really get angry and can be surprisingly smart. The reason he actually hates the rain is because when the day when Rosho decided to quit being a duo together it was raining. 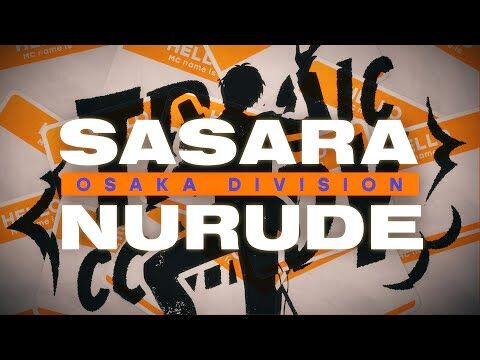 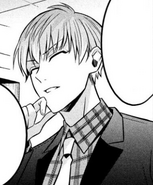 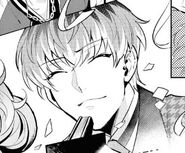 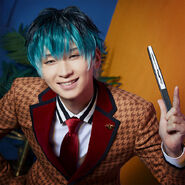